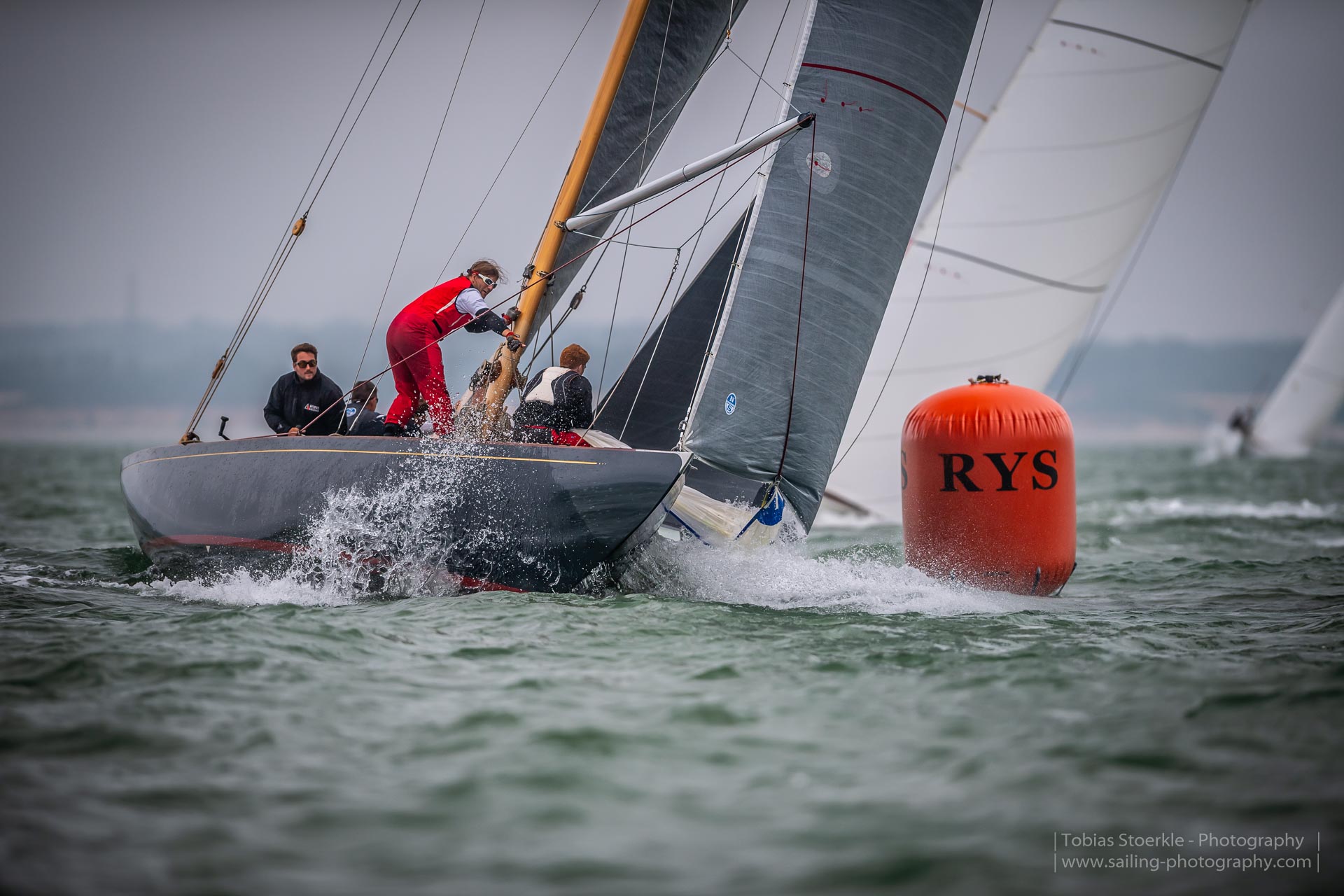 2019, the year of Brexit and of the fantastic World Cup from 20-27th of July on the notorious Solent waters off Cowes. The Royal Yacht Squadron provided an excellent World Cup Regatta in picture perfect conditions. With the BEMA members showing a full packed social programme.

The 8mR fleet proved once again why, even after so many years, these yachts remain the most beautiful yachts on the water. The sleek elegant lines formed a stark contrast against the boats in the harbour preparing for the Fastnet Race, starting the weekend after the World Cup. The fleet consisted of 3 moderns, 5 Sira class yachts, 6 Neptune yachts and 1 first ruler, giving a nice cross section overview of the fleet.

The week started with the Regatta au Mer from the Societé Nautique Geneve, who traditionally host the tune up races. With 2 races sailed, the winner was Yquem II in the Moderns, If in Sira class and Saskia in Neptune. While it usually is bad luck to win the tune- up races, the crew of Yquem II showed the class that this is pure superstition as they later on won the World Cup.

The first day of racing started with a 8-15kts South Westerly breeze, and all competitors were anxious to display their racing prowess. The trick was to know what the current was doing. Running with 2,5kts it proved critical in finding your way forward in the fleet.

Even though they started at the back of the fleet, Falcon managed to get a 2nd place behind Carron II for Neptune. Carron II also beat If and Wanda in Sira proving the strength of the yacht and crew of Carron II. The Moderns had a tight battle between the winner Yquem II and Conquistador.

Post race analysis showed everybody the importance of staying in touch with the wind shifts, and with the current. The British Eight Metre Association held the first evening of ciders.

The second race, was run in 9-15kts of wind. Conquistador proved to be the fastest boat, with Yquem II second and Miss U, who had retired in the first race, and was chartered by the Canadian team of Raven, coming in third. In the Sira class, Wanda proved to be faster than If, with Saskia being the first of the Neptune boats crossing the line.

However, the story of the day was the big hit between the 2 Fife’s; Carron and Falcon. In a port/starboard situation the team of Carron failed to have a look out, and ran up on the deck of Falcon. With severe damage, the team of Falcon made it back to the harbour. Carron lost her rig and could not sail back under her own power to shore.

The teams met at the dock and after making sure everybody was ok, a first assessment was made of the damage. With the racers coming back to the dock, it was amazing to experience the friendship in the class, where teams offered help in every form or shape where possible, with the use of ribs, contacts, information, spare parts. This shows the true essence of 8mR sailing, where you want as good a competition as you can get, because we are all present at an event to sail. A big thank you to all our competitors for helping out from team Falcon and we sincerely hope that Carron will be in Enkhuizen next year.

Race 3 was held in 9-16kts South Easterly breeze. To be fair, as I was of Team Falcon, I did not see anything from this race as for us it was a race to get back on the water. We came in when the yachts were doing their final downwind leg.
The 3 moderns, were having their own fight, with Yquem II coming ahead of Conquistador and Miss U. In Sira, Wanda proved strongest, with Carron II showing the Sira fleet that Neptune yachts are a force to reckon with, as she was followed by Saskia and Helen (both Neptune).

Race 4 raced in 8-16kts South Easterly saw the comeback of Falcon on the racecourse. Though they made more water then ever, requiring constant pumping, they were back and took the first Neptune spot after the Sira yachts Wanda and IF and the moderns Yquem II, ahead of Miss U and Conquistador. Saskia and Carron II came in after Falcon.

Race 5 saw another dominant sail by Carron II, coming in right behind the moderns (lead by Yquem II). Ahead of Wanda and If.

Because the Neptune yachts also fight for the Sira and Overall World Cup, tension was high for Sira yachts to not only defend their position against themselves, but also fend of the Neptune yachts. Where the Neptune class would often be firm in the mix with the top end of the fleet. The level of competition has risen over the past couple of years. With the growth of the British fleet providing possibilities to create several regatta’s and training weekends to get up to speed.

Overal, Yquem II was the winner of the 8mR World Cup and the Coppa d”Italia (prize for best European yacht), with Conquistador second and Miss U third. The moderns were followed by the Sira yachts Wanda beating If and Carron II on third. In Neptune, Carron displayed her true power by winning the Neptune Trophy again, in front of Falcon and Saskia in 3rd. The First Rule Cup was won by the only first ruler on the course, Njord of Cowes.

The Royal Yacht Squadron made sure all races were perfectly organised. They also had help from the Dutch PRO of the World Cup next year, who came to gain experience of how things were run in the 8mR class. The social program during the regatta made sure that everybody had time to meet each other once again.

A big thank you to the Royal Yacht Squadron and the BEMA for hosting the regatta and off course to all competitors to make it a memorable event.

The results of the 8 metre World Championship in Cowes: overall winner: