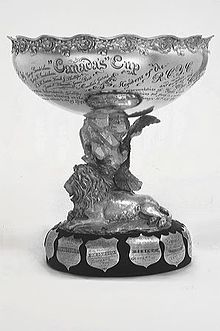 A History of the Canada’s Cup

When Canvas was King – by Robert B. Townsend

A match having been arranged in the winter of 1895-96 between the Royal Canadian Yacht Club and the Lincoln Park Yacht Club, Chicago, for a race between top-notch cutters, a syndicate was formed by Canadian yachtsmen – Aemilius Jarvis, George Gooderham, George H. Gooderham, : S.F. McKinnon and F.. Phillips, all of Toronto and James Ross of Montreal – to provide the Canadian candidate.

These amateurs spent $6,000 and their valuable time in getting the boat, and seven other amateurs – eight, including Jarvis, devoted their whole summer to sailing her to victory. The seven others were J.H. Fernside of Hamilton, and : Gerald Boulton, Wm. Moran, Edward Bailey, : Herbert Parsons, Sidney Small and W.C. Clouson of Toronto.

The Lincoln Park club’s commodore, : Charles E. Berriman, had begun to build a fin-keel cutter, the latest wrinkle. She was designed by Theodore Poekel, a draughtsman in the famous Herreshoff establishment, which had produced the phenomenal cutter Niagara owned by Howard Gould, Niagara had swept the board in British waters in 1895 racing with the 20-raters. The : Berriman candidate, named Vencedor, was said to be a copy of her.

There were half a dozen good cutters on Lake Ontario at the time, but the Canadian syndicate did no shopping around. They cabled to Will Fife, Jr. of Fairlie in Scotland, the leading British designer, to let them have

plans and specifications for a fin keel cutter, of 42-ft. racing length, the minimum agreed upon. Within two months of the arrival of the plans, the new yacht was sailing the first of her trial races on Lake Ontario. She had grown like a mushroom from the ballast up, in the building shed of : Capt. James Andrew of Oakville. She was ready for caulking six weeks after her keeltimber was cut. Her sails were by Ratsey and Lapthorne, and her standing rigging was prepared under Fife’ direction. Ten weeks after the boat had been ordered by cable, she was launched and had sailed her maiden race against Zelma, another Canadian build boat designed by William Fife.

Aemilius Jarvis, then 36, and manager of the Bank of Hamilton, was the managing owner in the syndicate from the day the cable was sent to Fife – on his suggestion – and he was not one to let the grass grow under his feet.

Four months after her blueprints arrived from Scotland the Canada, as she was happily christened, was racing off Toledo on Lake Erie for the trophy which has borne her name ever since.

Nor was she pitchforked into the contest half rigged and with the fresh paint peeling off her bottom and the crew running around in circles looking for the key of the keelson and trying to find which way the sails went up. She had been perfectly groomed for two months, and her crew had done nothing but train daily in the same period.

The Canada’s racing crew of prominent business men did all their own work, from pot leading to palm-and- needle. They lived on board. No pullmans, no cocktail lounges, no parties while the Cup was unwon. They did have one good pro sailor, Ed Roach, for “beef on the rope” and shipkeeping and cooking. But they all, including Jarvis, worked as hard as Roach and harder. They sailed Canada on her own bottom all the way from Toronto to Toledo. It gave more opportunity for training. Before starting, Jarvis explained to his gentlemen crew that to live together in comfort in small compass it was necessary to have a place for everything and everything in its place. Each day after breakfast he would make an inspection of the ship.

The first morning he found pajamas sticking out of lockers, the odd shoe on the cabin floor, and a shaving brush rolling around. The Canada towed up the Long Level of the Welland Canal with a wake of loose belongings floating till they sank.

Next morning one of the amateurs – at home a business magnate – was howling for the towel and toilet kit. He hadn’t even a toothbrush.

“Isn’t it in your bag, So-and-so?” asked Jarvis. He always used the sur-name in formal address.
“No Aemilius,” replied the big shot, “I don’t remember bringing it down yesterday after I shaved on deck. Dammit, it must have blown overboard!”

“No, So-and-so,” said Jarvis, “I threw it overboard, when I found it draped around the skylight. A place for everything, and everything in it’s place, you know.” Later Jarvis threw another erring amateur onto the deck

at Cleveland and left him there for an indiscretion connected with hoisting, although he was a life long friend.

Big Shot gnashed his teeth but the result of such discipline was that the crew of the Canada cold lay hands on anything that was wanted, daylight or dark, blow high, blow low. They could reef the 1,000-foot mainsail in two minutes, they could shift jibtopsails in 30 seconds and gybe the enormous spinnaker in a minute flat. They knew where everything was, for they had put it there hundreds of times, and they knew where everything should go. That wins races.
It – and Jarvis’ skill and judgement – won the Canada’s Cup.

“Quick in stays as a bike and stiff as a church” was the way schooner hands described Canada when she came out. The bicycle, on which “scorcers’ could knock off 15 miles an hour, was then out fastest personal vehicle. Such comment requires interpretation. Being quick in stays meant that Canada cold turn fast from tack to tack. Stiff as a church meant that she stood up to her work and carried a press of canvas well.

She was really revolutionary in those days. All her ballast outside. It was not in a cigar-shaped bulb at the bottom of a metal plate like an enlarged centre board. This was the fin-keel reliance of such yachts as the Vencedor. It saved bulk but gave more friction. Canada’s ballast was so streamlined into the body of the yacht that all seemed of one piece. Viewed end on, out of water, Canada’s silhouette was that of a lily plant, springing from its bulb (the ballast) on a sweetly curved stalk (the deadwood)

and swelling out into cup-shaped bloom (the hull).
Seen broadside, out of the water, Canada startled onlookers by her overhangs and reversing curves. hers was the first Canadian with a spoon bow. The convex curve of the stem swept in a segment of a circle to the waterline. There it flattened out and descended in boldly reversed curve to the forefoot of the ballast. This rockered back in another flatter curve to the heel of the sternpost. The sternpost slanted upward in a straight line – the only one in the whole profile – towards the waterline. From there aft the hull tapered out to a feather edge. This cutaway forefoot and raking sternpost, and the long overhang made her so quick in turning. Hull, deadwood and ballast, all emphasized the suggestion of the fast-swimming fish. The Elizabethans used to draw a fish first and line out their hull profiles from that. Designers were so modern in 1896 that they had forgotten that, and we were “discovering” the idea that you could sail faster over the water than through it. Canada was finished like a piece of jewellery, black enamel above, white enamel below, showing at the waterline in smart straight boot-topping. One line of gilt ribbon in a cove ran all around her, at deck level. On the port bow the arms of Canada’s seven provinces, the well- known patchwork quilt,” were enamelled in full colour surrounded by a gilded wreath of maple leaves,. On the starboard was the blue white- burgee of the R.C.Y.C., crown above and beaver below, circled in naval oakleaves.

Pretty? – Pretty as a picture. But all the prettiness, from the gilt ribbon downwards, except the enamelled crests, disappeared under a dull grey coat of plumbago – blackened stove polish – when she went forth to war.

Especially was the white enameled underbody doomed to a kitchen darkness. It looked lovely, but it was not nearly as soothe and slick as the polished blacklead which replaced it.

Canada’s gentlemen amateurs put the blacklead on and polished it with their own strong hands and plenty of elbow grease.

Vencedor, Canada’s opponent was the larger yacht. In light weather she needed a thundering big clubtopsail. Jarvis insisted that its increase in sail area would throw her over measurement, and disqualify her. He was right. She abandoned it, and lost the race. The next day, when it was blowing hard and raining Vencedor asked for a postponement. He didn’t want to shrink her brand new mainsail out of shape. Jarvis, weather wise, agreed. He knew Vencedor could outsail Canada if it blew hard enough, and that by afternoon or the next day the blow might be over and Canada would have the better chance. When they did race it was blowing quite fresh, but dry, and Canada outwinded Vencedor so much that the latter, although leading, could not give the required time allowance and lost the race and the cup by 26 seconds.