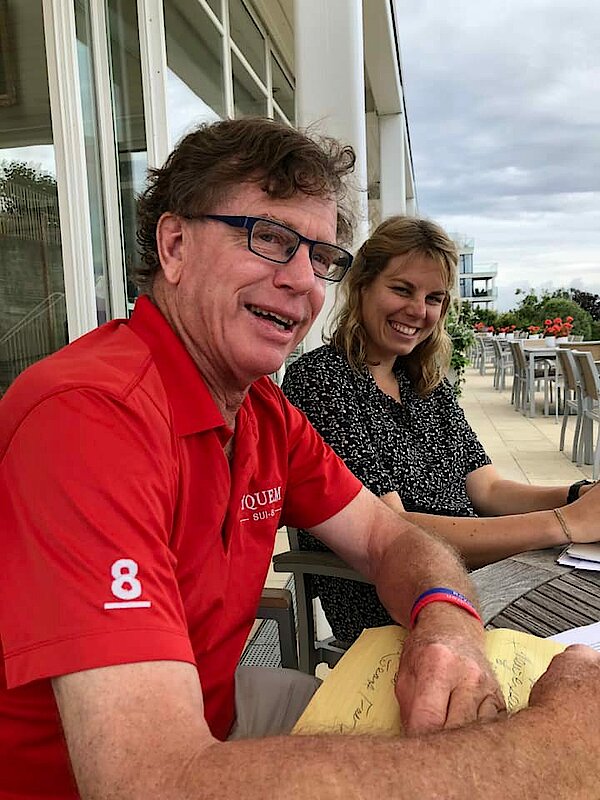 The year ended with a sad note after our fellow sailor Guy Jones passed away on the 29th December 2021 in Toronto surrounded by his family. As a part-owner of Bangalore (CAN-6) and owner of Ranja (SWE-7) and Yquem (SUI-6), Guy was a true 8mR enthusiast.

Guy first acquired Tore Holm-design Ranja from California, which joined the RCYC 8mR fleet in Toronto. Guy did a lot of work on Ranja and raced her actively. Ranja was later sold to the Netherlands, where she is waiting to be restored. In addition, Guy acquired modern Yquem (ex-Spirit) from Geneva, Switzerland, which he continued to race with the Ranja crew. In 2016 Guy donated Yquem to the Youngstown YC, which was the Club where he originally started sailing, for their Canada’s Cup campaign. The young crew of Yquem gave Hollandia a good ride, despite eventually not winning the Cup. Guy also extended the same generosity to me, when he borrowed Ranja for me to race at the 2010 Worlds in Toronto. In 2017 we also had a chance to race together on Lara in Hanko, Norway with a Finnish-Canadian crew. As another example of his generosity, Guy and his wife Vaska opened their beautiful home in Toronto to visiting yachties, and their hospitality was outstanding. Their two cats Napoleon and Josephine were probably not so keen about the visitors with the exception of Guy-Roland, who was a regular guest at the house.

Most will probably remember Guy for his brilliant sense of humor. Even under stress, Guy would always find a funny side. Guy played a key role in building bridges between the North American and European fleets. With his great diplomatic skills, Guy was able to find solutions that pleased the majority and allowed us to move forward. Guy was a very hard-working and humble person, who did not make a number of himself. I was very lucky, when I managed to talk Guy into joining the Executive Committee. I did, however, promise him that it would be fun, which he kept reminding me about. I could not have asked for a better partner to work with. During the meetings Guy would scribble every word on his yellow legal pad, which no one else could read. We actually lost a protest in Hanko, because the Jury refused to read Guy’s hand-writing. If anyone has a copy of the ruling, I would love to have it. In addition to eights, Guy was very passionate about the America’s Cup, and through his wife Vaska, Guy learned to enjoy Paris, which became a special place for them.

I am honored to have met Guy and shared many years of friendship with him. I will miss the witty conversations with him, and the enormous energy Guy possessed. My deepest condolences to Vaska and Guy’s son Brendan and his family for their loss.